Energy plays a major part in Australians’ lives, with both households and businesses relying on various types of energy for heating, cooling, cooking, transport and machinery operation.

Growth in Australia’s economy has led to increases in energy use, particularly in expanding industries such as the mining industry. (Endnote 1) Other factors, including an expanding population, and the subsequent increase in the number of households requiring power and heating, have also contributed to this increase. While energy use affects household and business related costs, it also impacts the environment, accounting for more than three quarters (77%) of Australia’s total greenhouse emissions in 2009. (Endnote 2)

Legislation setting the foundation for a carbon price was passed through the Senate in 2011. This was aimed at reducing greenhouse gas emissions (carbon pollution) and moving Australia to a clean energy future. (Endnote 3) This legislation, coupled with widespread media coverage on the potential financial impact on households, has fuelled public interest in energy consumption and related costs.

WHAT TYPES OF ENERGY AND HOW MUCH DID WE USE?

The remaining one quarter (26%) of Australia’s total net energy use in 2009-10 was by households (1,014PJ). Despite this being an increase of 2% since 2008-09, household energy use per capita remained unchanged over this time (46GJ). The types of energy most commonly used by households, including fuels used for transport purposes, were petrol (45%), electricity (21%) and natural gas (14%).

Australia’s household energy consumption has increased slightly over the last decade. According to data from the Bureau of Resources and Energy Economics (BREE), Australian households’ energy consumption, excluding fuels used for transport purposes, grew by 54PJ (14%) between 2000-01 and 2010-11 (from 398PJ to 452PJ). The fuels with the greatest increase in household consumption over this period were electricity (25%, from 179PJ up to 223PJ) and natural gas (22%, from 122PJ up to 148PJ).

BREE data showed that, in 2011, households in New South Wales (NSW), combined with those in the Australian Capital Territory (ACT), consumed the most electricity in 2010-11, with 86PJ, while the Northern Territory (NT) had the lowest electricity consumption across the states and territories with 2.1PJ. (Endnote 4)

Natural gas consumption was highest in Victoria, home to Australia’s most extensive reticulated gas network,(Endnote 5) with 100PJ in 2010-11. The NT and Tasmania used virtually no natural gas (with 0PJ and 0.1PJ respectively).


HOUSEHOLD ENERGY CONSUMPTION, BY FUEL TYPE, BY STATE AND TERRITORY - 2010-11 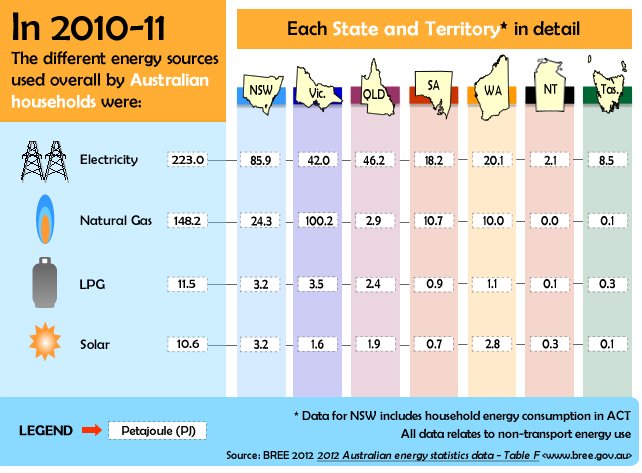 HOW HAS THE COST OF ENERGY CHANGED OVER TIME?

Between June 2007 and June 2012 , the retail price of gas and other household fuels also rose across the capital cities. The largest increase was in Perth, where prices rose by 88%, followed by Canberra (48%). The smallest increases were in Darwin and Hobart, with 21% and 20% respectively.

HOW MUCH ARE WE SPENDING ON ENERGY?

According to results from the ABS Household Expenditure Survey (HES), in 2009-10 electricity, gas, heating oil and wood accounted for $32 per week of household expenditure. Although this was a real increase of nearly $5 per week (at 2009-10 prices) since 2003-04, the amount as a proportion of real total household expenditure remained the same, at 2.6%.

Some Australian households reported being under financial stress in 2009-10, with more than one in ten households (13%) reporting being unable to pay electricity, gas or telephone bills on time.

In the states and territories

Despite the varying tariff schemes in place across the country, and variations in households’ heating and cooling requirements across climate zones, there was little difference between state and territory households’ expenditure on electricity, gas, heating oil and wood.

In 2009-10, Tasmanian households had the highest expenditure on electricity, gas, heating oil and wood as a proportion of their total expenditure on goods and services, with 3.6%.

(a) Households in collection districts defined as Very Remote or Indigenous communities are excluded, accounting for about 23% of the population in the NT.
(b) As the balance of state is not available for the ACT, estimates for the ACT are the same as those for Canberra.
Source: ABS Households Expenditure Survey, Australia: Summary of Results, 2009-10 (cat. no. 6530.0)

HOW ARE WE REDUCING OUR ENERGY USE?

Climate change has been identified as one of the biggest issues facing the nation (Endnote 6) and the world. Results from the 2007-08 Environmental Views and Behaviours component of the ABS Multipurpose Household Survey showed that nearly three quarters (74%) of Australian adults were concerned about climate change. This, in addition to concerns about rising energy costs, has led to greater attention being focused on ways in which households and individuals can reduce their carbon footprints.

Greater environmental awareness, and a desire for cheaper alternatives for powering homes, may be responsible for the considerable increase in the number of renewable energy generation units installed in households over the last decade.

While household renewable energy units have low operating costs, initial installation can be expensive.(Endnote 8) A range of different government grants and rebates have been available to households to help reduce installation costs and encourage the use of renewable energy in the home. Differences between these policies and rebate schemes can impact household consumption of energy sources, and should be taken into account when comparing trends across the states and territories.

Many households are conscious of the amount of energy consumed by their household appliances and are adjusting their purchases accordingly.

The ABS 2011 Energy Use and Conservation Survey showed that many households considered cost price and energy star rating to be the most important considerations when purchasing household appliances in the last 12 months, with nearly half of households citing these factors as having influenced their purchases (with 47% and 45% respectively). Other factors such as the features of the appliances (19%) also influenced households’ purchasing choices.

Insulation helps to ensure dwellings are warm in winter and cool in summer, and can assist in reducing household power bills and greenhouse gas emissions.

In 2011, more than two-thirds (69%) of Australian households had insulation, a 9% increase since 2005. Insulation was most common in separate houses, with more than three-quarters (77%) of these dwellings being insulated, compared with less than one-third (29%) of flats, units and apartments.

Findings from the Environmental Views and Behaviours Survey showed that, of people who reported that they were concerned about climate change in 2007-08, most (92%) said that they had taken steps to limit their personal electricity use. However, a large proportion (78%) of those not concerned with climate change had also taken steps to limit their electricity use, reflecting many Australians’ concerns about the rising cost of energy.

Older Australians were more likely than younger Australian adults to take steps to limit their electricity use. Nearly nine in ten (88%) people aged 65 years and over took steps, compared with more than seven in ten (74%) people aged 18-24 years. People aged 18-24 years were more likely than older people to report that they did not care how much electricity they used, with 5% of people in this age group, compared with 1% of other adults.

The most commonly reported reason for people aged 25 years and over not having taken steps to limit their electricity use was that they felt their electricity consumption was already low enough (38%), with nearly half (48%) of people aged 65 years and over giving this reason. Conversely, the most commonly reported reason among people aged 18-24 years was that they had not thought about saving electricity (37%). Young people’s tendency to be less mindful of electricity saving practices could partly be due to a greater likelihood of them still living in the family home and not bearing the responsibility of paying electricity or gas bills. In 2006-07, around half of young men (49%) and young women (45%) aged 18-24 years had never left the parental home, with more than two fifths (41%) staying for financial reasons. (Endnote 9)

For people whose electricity use decreased, four in five (80%) reported that this was due to efforts to conserve energy. While this was the most common reason given across all age groups, other reasons such as the purchase or use of energy efficient electrical appliances (24%), lifestyle changes (22%) and cost saving (21%) were also commonly reported.


REASONS WHY PERSONAL ELECTRICITY USE DECREASED - 2007-08

This increased awareness of energy consumption, and the financial costs involved, is likely to see households continue to engage in energy saving practices into the future.

These documents will be presented in a new window.